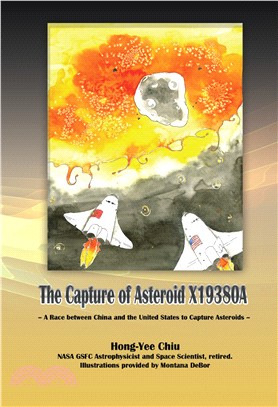 The time was between 2123 and 2148. In the 22nd century, most world mineral resources were depleted, and asteroids appeared to be the only locations in the Solar System to look for resources. During the year 2132 U S intelligence discovered that there was a fleet of giant clustered rockets sitting on the launch pads in Jiuquan, the largest Chinese space port, ready for launch. Alarmed, authorities searched old surveillance files and discovered that this fleet was a part of a deep interplanetary space expedition project which began a few years ago. Famed U S space scientist Dr. David Zhang of NSEA (National Space Engineering Administration) examined the surveillance images, and discovered that a newly established Chinese corporation XinTianDi was developing a kind of humongous nuclear devices with powers equivalent to several thousand megatons (billion tons) of TNT equivalent. A Los Alamos nuclear weapon expert Jack Brown was of the opinion that such huge nuclear devices had no places in war. Meanwhile, Dr. David Zhang also discovered that the armada of humongous spaceships was also the work of XinTianDi, and a fleet of spaceships, also humongous, launched earlier were heading towards a 90 mile sized asteroid 8 Flora. U S President immediately ordered the launch of a spy spaceship to 8 Flora to find out the intentions of the Chinese space fleet. This spy spaceship discovered that the Chinese were using autonomous robots to build a base station on 8 Flora. This project was under the leadership of a Chinese top space scientist, Dr. Wei SiMei (Stanley Wilson), a descendent of an immigrant from the United States. Under his leadership, the Chinese were sending minerals from this asteroid. U S immediately began a space project as never seen before, also to establish a mining base on 8 Flora. The project was under the leadership of David Zhang. Thus China and the United States were engaged a fierce but peaceful competition to mine the asteroids.
Yet China was already one step ahead. China had already made plans to bring an asteroid to become a satellite of the Moon. Using nuclear explosives with total blast power of several thousand megatons TNT equivalent, Chinese robots were able to separate a pair of contact binary asteroids, and one component was heading towards the Earth via Mars. Using the gravity of Mars, this component, X19380A, was slowed down enough to be captured by the Moon as a satellite. China renamed this newly acquired Moon satellite “GuangHanGong,” a mythical palace on the Moon in Chinese mythology. Soon afterwards, U S also used a set of humongous nuclear blasts to send an asteroid to near earth space, and it also become a satellite to the Moon. The United States named the newly acquired trophy Mahina, Hawaiian goddess of the Moon. The United States used the excuse to develop Man in Mars program to mothball Mahina, and secretly planned to use it for military objectives. China, on the other hand, developed GuangHanGong into a space tourist resort. China leased lands on GuangHanGong to several financial groups of the world to develop similar space resorts. The story ends with a maiden voyage of a Chinese space liner, HouYi-ChangĔ to GuangHanGong.
As for the story of La Boutique Fantistique, please read this book.
丘宏義，康乃爾大學博士，上海出生，在中國動亂中長大，在臺灣就讀國立臺灣大學，旋即赴美於三年內在康乃爾大學取得博士學位，旅居美國，環遊世界，時代雜誌（Times）曾冊封為「最優秀的美國科學家」。丘博士任職於美國國家航空暨太空總署（NASA）擔任天文物理及太空科學專家長達35年，曾在知名大學如哥倫比亞大學、耶魯大學、紐約市立大學石溪大學等兼任教授，著有科學著作130餘篇、書籍十餘冊、科普中文譯作十餘冊、科普文章十餘篇等。美國聯邦政府退休後與海外華人菁英創辦漢世紀集團與EHGBooks微出版公司，並且擔任資深合夥人兼任總裁，帶領漢世紀技術團隊致力研發華人世界科技與人文的資訊解決方案：2008年帶領漢世紀推動臺灣加入聯合國教科文組織（UNESCO）贊助的世界數位圖書館（World Digital Library），2012年帶領漢世紀開發全球第一套Amazon微出版漢字標準資訊解決方案（Amazon Micropublishing Chinese Solution）。
Table of Contents
Cast of Characters
Introduction ― Asteroids, Robots and Space Travel
Part I. The Search for New Resources in the Solar System
Chapter 1. Discovery of Chinese Activities
Chapter 2. A Secret Project in China
Chapter 3. Projects and Plans
Chapter 4. The Chinese Operations
Chapter 5. The Chinese Expedition to 8 Flora
Chapter 6. America Catches Up
Chapter 7. The Cornucopia Project
Chapter 8. The American Endeavors
Part II Mining Operations on Asteroid8 Flora
Chapter 9. First Batch of Minerals from 8 Flora
Chapter 10. Contact Binary Asteroids
Chapter 11. American Dreams and a Humongous Chinese Explosion
Chapter 12. X19380A Passed by Mars – Destination: Moon
Part III. American Acquisition and Chinese Space Enterprises
Chapter 13. Operation Mahina of the United States
Chapter 14. Touring X19380A and a Space Hotel
Chapter 15. Board Meeting on Space Hotel
Chapter 16. La Boutique Fantistique
Chapter 17. Project Mahina
Chapter 18. Cosmic Hotel ChanGong – The First Travel to an Asteroid
Epilogue
PrevNext