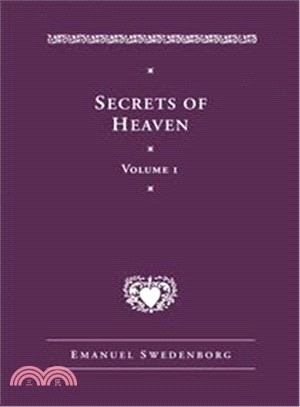 The first major theological work of the Swedish scientist-turned-seer Emanuel Swedenborg, Secrets of Heaven is in one sense a traveler's account. It reveals the unseen realms that await beyond death--the light, the warmth, and harmony of the angelic heavens and the varied darkness of the multitudinous hells. But in addition, the work offers a detailed examination of Genesis and Exodus, providing a model for a new way to understand the entire Bible. Prized for both the simplicity of its explanation and the breadth and depth of its vision, Swedenborg's reading of Scripture discloses layer upon layer of inner meaning, all without undermining the power and import of the literal word.

This first of the multivolume work contains an introduction by Wouter J. Hanegraaff, professor of History of Hermetic Philosophy and Related Currents at the University of Amsterdam, and a reader's guide by Swedenborgian scholar William Ross Woofenden and New Century Edition Series Editor Jonathan S. Rose.

The New Century Edition of the Works of Emanuel Swedenborg is a modern-language, scholarly translation of Swedenborg’s theological works. The series’ easy-to-read style retains the dignity, variety, clarity, and gender-inclusive language of Swedenborg’s original Latin, bringing his thought to life. Introductions and annotations by eminent, international scholars place Swedenborg’s writings in their historical context and illuminate obscure references within the text, enabling readers to understand and trace Swedenborg’s influence as never before.

Emanuel Swedenborg (1688-1772) was a Swedish scientist, nobleman, and mystic who spent his life investigating the mysteries of the soul. Born in Stockholm to a staunchly Lutheran family, he graduated from the University of Uppsala and then traveled to England, Holland, France, and Germany to study and work with the leading scientists of the time. He gained favor with Sweden’s King Charles XII, who gave him the position of overseer of the Swedish mining industry. Later, he was given a seat on the Swedish House of Nobles by Charles XII’s successor, Queen Ulrika Eleonora. Between 1743 and 1745 he began to have visions of heaven, hell, and Jesus Christ which resulted in a stream of books about the nature of God, the afterlife, and the inner meaning of the Bible. He devoted the last decades of his life to studying Scripture and presenting his own unique theology to the world
PrevNext