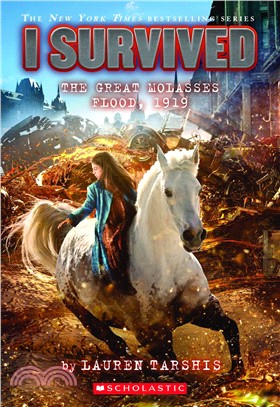 One hundred years ago, a killer wave of molasses struck a crowded Boston neighborhood. Discover the story of this strange disaster in the next book in the New York Times bestselling I Survived series.
There were warning signs that the molasses tank would break. The steel sides moaned and groaned. Molasses oozed from its seams. But the people of Boston's North End -- mostly poor immigrants -- were powerless to complain to the big molasses company.

On a bright January day in 1919, the tank finally broke and almost three million gallons of molasses rushed the neighborhood. At 15 feet tall, 160 feet wide, and traveling at 35 miles per hour, the gooey wave was more destructive than any flood of water would have been. Lauren Tarshis tells the riveting story of one child who was swept up in the sticky storm and lived to tell the tale.
Lauren Tarshis's New York Times bestselling I Survived series tells stories of young people and their resilience and strength in the midst of unimaginable disasters. Lauren has brought her signature warmth and exhaustive research to topics such as the September 11 attacks, the destruction of Pompeii, Hurricane Katrina, and the bombing of Pearl Harbor, among others. She lives in Connecticut with her family, and can be found online at laurentarshis.com.
PrevNext