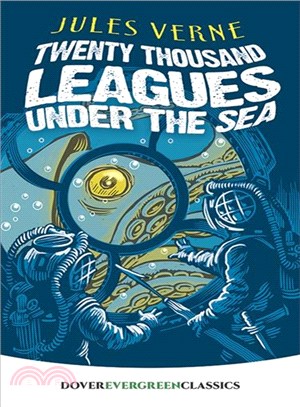 French novelist Jules Verne — "the man who invented the future" — captured and intensified the human impulse to explore the world's hidden regions. This prophetic 1870 adventure novel, centering on a fabulous underwater craft commanded by the brilliant and mysterious Captain Nemo, was written well before the development of the deep-water submarine.
Combining marvelous scientific achievements with common, everyday events, the story brims with intricate descriptions of a futuristic vessel and bizarre scenes of life on the ocean's bottom. Sights include Red Sea coral, wreckage from a historic naval battle, Antarctic ice shelves, and the mythical city of Atlantis. Rousing adventures range from a confrontation with a giant squid to an encounter with belligerent cannibals. The crowning achievement of Verne's literary career, Twenty Thousand Leagues Under the Sea influenced H. G. Wells and generations of writers, inspired numerous films, and continues to captivate readers of all ages.
"The reason Verne is still read by millions today is simply that he was one of the best storytellers who ever lived." — Arthur C. Clarke. Jules Verne started out composing librettos, but the French-born author's passion for travel and exploration compelled him to turn to adventure tales, creating the prototype for today's science fiction. One of the most translated authors in the world, Jules Verne is best known for his classics, Journey to the Center of the Earth, Twenty Thousand Leagues Under the Sea, and Around the World in Eighty Days.
PrevNext