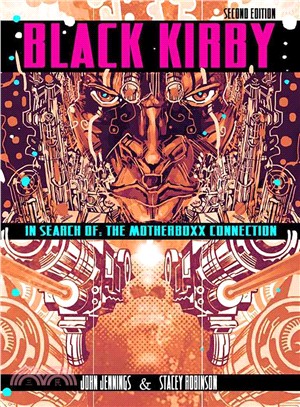 A catalog of primarily visual artworks-on-paper, this collection is the work of a creative duo that makes up the collaborative entity, Black Kirby. Their art celebrates the groundbreaking work of legendary comic creator Jack Kirby and functions as a highly syncretic mytho-poetic framework by appropriating Kirby's bold forms and revolutionary ideas combined with themes centered on AfroFuturism, social justice, Black history, media criticism, science fiction, magical realism, and the utilization of Hip Hop culture as a methodology for creating visual expression. Their work also focuses on the digital medium: how its inherent affordances offer much more flexibility in the expression of visual communication and what that means in its production and consumption in the public sphere. In a sense, Black Kirby appropriates the gallery as a conceptual crossroads to examine identity as a socialized concept, and to show the commonalities between Black comics creators and Jewish comics creators and how both utilize the medium of comics as space of resistance. The duo attempts to re-medicate blackness and other identity contexts as sublime technologies that produce experiences that can limit human progress and possibility.
John Jennings is an associate professor of art and visual studies and an award winning visual artist, designer, and graphic novelist. He is the coauthor of Black Comix: African American Independent Comics Art and Culture and The Hole: Consumer Culture, Volume 1. He lives in Buffalo, New York. Stacey Robinson is an assistant professor of graphic design. His work discusses ideas of “Black Utopias” as spaces of peace away from colonial factors by considering past and present Black protest movements and the art movements that documented them. ?He has been a part of many exhibitions including Invisible Ink: Black Independent Comix at Univerity of Tennessee ?Beyond the Frame: African American Comic Book Artists. He lives in Chicago.
PrevNext