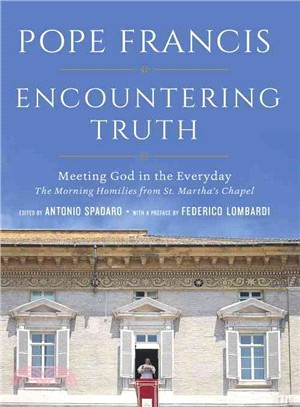 Experience the morning homilies of Pope Francis and witness how he continues to change the life of the Catholic Church.

Shortly after seven in the morning, Pope Francis gives a brief homily in the little Vatican chapel of Saint Martha, in front of an audience that is always different: gardeners, office workers, nuns and priests, as well as a growing group of journalists. It is a set appointment, and in some ways a revolutionary innovation, where a pope speaks to everyone, off the cuff, without any written text, as he would have done as a parish priest.

Encountering Truth is a collection of highlights from these homilies from March 2013 to May 2014. Along with summaries by Radio Vaticana (who recorded and transcribed the homilies) and commentary by Father Antonio Spadaro, SJ, these reflections provide moments of inspiration, simplicity, and a glimpse into the papal world very few ever get to experience.

POPE FRANCIS is the first Latin American to be elected to the chair of Peter. Born Jorge Mario Bergoglio in Buenos Aires, Argentina, he was ordained as a priest in 1969. He served as head of the Society of Jesus in Argentina from 1973 to 1979. In 1998 he became the archbishop of Buenos Aires, and in 2001 a cardinal. Following the resignation of his predecessor, Pope Benedict XVI, on February 28, 2013, the conclave elected Bergoglio, who chose the papal name Francis in honor of Saint Francis of Assisi.