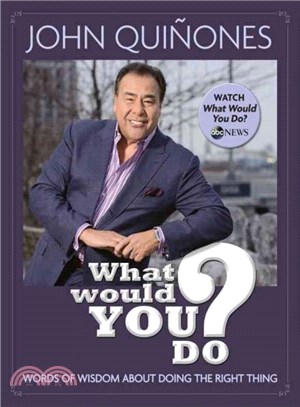 Every day is full of "what would you do?" moments. They can be as simple as times when you're considering whether to bother saying thank you to the taxi driver before getting out of the cab. Or they can be more complicated, such as when you've witnessed discriminating mistreatment of someone and you have to decide whether to speak up. We've all been there.

What Would You Do?-Doing the Right Thing Even When You Think No One's Watching is full of real-life stories and staged ones from the highly rated ABC News program. Author John Qui ones takes readers on a journey of self-discovery and inspires them to act in ways they would if they thought a hidden camera was focused on them.
John Qui ones is the anchor of "What Would You Do?," one of the highest-rated newsmagazine franchises of recent years. During his twenty-five year tenure at ABC News, he has reported extensively for all programs and platforms and served as anchor of "Primetime." Qui ones has won seven Emmy Awards for his work on "Primetime," Burning Questions," and "20/20." Qui ones graduated from St. Mary's Univeristy in San Antonio, Texas and has a master's degree from the Columbia School of Journalism. Qui ones lives in New York City with his wife.
PrevNext